We think a litter box is simply a place where our cats do their business. We put it in a place that’s convenient for us and we expect our pets to follow our rules without thinking about how they feel. This is not how it should be.

Who wants to go to a restroom situated in a far or inconvenient place? No one right? Cats form a relationship with their litter box and we should also consider their perspective in deciding where we place it.

Kittens and adult cats also have different needs. Senior cats may difficulties getting into a large litter box that the latter uses. Active cats can go wherever you place your litter box, but it may be difficult for overweight cats to go to a higher place where the litter box is located; the same challenges are applicable to older cats. If you used to have only one cat, a single litter box may be enough for your home. Once you take in more cats then a single litter box won’t suffice in many cases.

It’s important that your cat’s setup works both for you and your cat’s convenience. This applies to food, sleeping area, and litter boxes specifically.
Here, we’ll be discussing the most common mistakes in setting up your cat’s litter box and what you should do to avoid them.

Using the wrong size of the litter box

Many cat owners use a small litter box to keep it out of sight as much as possible. Small litter boxes are great because they take less space. Besides, your cat won’t even be able to fill it to the brim. Although there’s some truth in this rationale, there are a few factors owners fail to recognize.
The litter box’s size should be proportional to the size of your cat. A small box may restrict your cat’s movement, preventing them from properly using it. As a general rule, the box’s length should be at least 1.5x the length of your cat measured from nose to the base of their tail.

Have you ever tried using an unflushed toilet?

Even if its contents are yours, you may still find it difficult to use it because its simply uninviting and unclean. Just like humans, cats find it unappealing to use a dirty litter box.

Litter boxes should be cleaned at least once or twice a day. When you’re using clumping litter, you should fully empty the box and replace it with new litter as often as necessary. Don’t forget to scrub and clean the box regularly to remove any residue sticking to it.

Placing it in the wrong location

The golden rule is to never put the litter box next to the feeding bowl. No one wants to eat right next to where they poop, not even cats.

You know why cats dig and bury their waste underneath the soil? It’s to prevent predators from easily tracking their scent. It’s also the reason why they prefer to have their food placed away from where they’ve done their business. This habit is part of their feline instincts.

Look for a location that’s easily accessible to your cats. If your house has multiple levels, put a litter box on each floor to be safe. Also, place the box somewhere they’ll feel safe and undisturbed.

Placing it on a damp area may be unpleasant to some; some prefer to have it on hard flooring. Know your cat’s habits to make it easier for them to associate with the litter box when they need to go.

Also consider the physical condition of your cats. Older cats will have difficulty defecating on an elevated place, so its best to make sure to place the box where it’s readily accessible.

Having only one litter box for multiple cats

It’s like having one cubicle in a park frequented by hundreds to thousands of people every day. As a rule of thumb, always have more litter boxes than the number of cats you have.

Scatter them all around the house so they won’t feel invaded when another cat passes when one is doing their business.

Cats may fight for territory so just imagine the chaos if you keep a lot of them in one house with limited resources. To keep the harmony between your cats, always have an extra litter box so you won’t force them to compete when one box is already occupied. You don’t want any of them to just eliminate on the floor because they think every litter box is unavailable.
Remember it’s easier to clean the boxes than removing litter off your carpet. 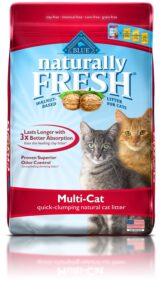 Cats also have texture preferences on where they want to do their business. Some prefer the soft texture and some prefer the hard and rough surface of cement while some like the sandy and loose material of soil.

Avoid scented litter boxes. Cats have are sensitive to scents and they may altogether avoid the litter box if they don’t agree with the scent.

Similar to humans, cats are also creatures of habit. If you want to change the brand of clumping litter you’re using, its best to gradually change it over a period of at least five days to help them get used to the new material.

If you have no idea what type of texture they prefer in their litter box, set up several boxes with different types of litter in each box. You’ll definitely know which one they prefer in just a day.

Some cat owners put too much litter in the box and there are many who put barely put enough to cover the bottom of the box. Clumping litter is made to absorb the liquid from your cat’s waste. If you don’t put enough in the box, the pee will directly come in contact with the box and it may linger there for quite some time. The stink will remain and both you and your cats won’t like it.

Pour just enough until you have a good 3 inch layer of clumping litter from the base of the box. From there, you can just adjust its amount depending on how often your cat uses the box. 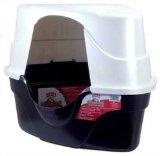 Many cat owners don’t want to see pee and poo, even if they’re on a litter box. This is why many choose to buy an enclosure to keep their litter boxes covered.

What’s not to love about enclosed litter boxes? For one, it’s aesthetically pleasing by keeping the view of waste materials away from your eyes. The enclosure also serves as a barrier to prevent litter and clumping litter from scattering outside the litter box when your cats kick them after doing their business. Lastly, the enclosure provides privacy to your cats while they’re doing their business.

What owners frequently fail to realize is that enclosed litter boxes cause more harm that outweighs the advantages we just discussed. Most of the enclosures are too small, limiting your cat’s movements and giving them a feeling of being trapped. As a result, some cats may just enter half of their body inside the enclosure when doing their business. Consider to yourself lucky if their face is the one sticking out of the box and not the other way around.

The cover also prevents the clumping litter from getting enough ventilation to dry the waste out. Enclosures may be pleasing to look at and you won’t smell your cat’s litter because it’s trapped inside. However, you won’t also immediately see if the box is full and ready for cleaning. You need to remove the cover first, which takes extra effort and check the box from time to time.

Although the enclosed space provides some sort of privacy, your cats will feel trapped inside because there’s only one way out. Cats want to have privacy and an escape route at the same time in case something startling happens. Their feeling of vulnerability inside enclosed spaces may result in litter box problems.

Punishing your cat for not using the litter box

Pet owners usually punish their little pals for doing their business outside the designated area. Pets don’t do this for revenge or just to piss you off. Your cat may not be using the litter box for certain reasons.

Usually, a cat who is used to using a litter box is experiencing a medical condition that forces them to completely avoid the box. The most common medical problem cats experience is UTI. Make sure you get them checked regularly for any illnesses before you assume the cause of the problem is behavioral.

Your setup and the environment where the box is placed might be causing the litter box issue. Make sure to put the box in an accessible location which will make them feel safe and secure.

If you have tried anything on this list without avail then its recommended visiting your local VET to get a second opinion. If you would like this advice then visit bestselfcleaninglitterbox.com blog.