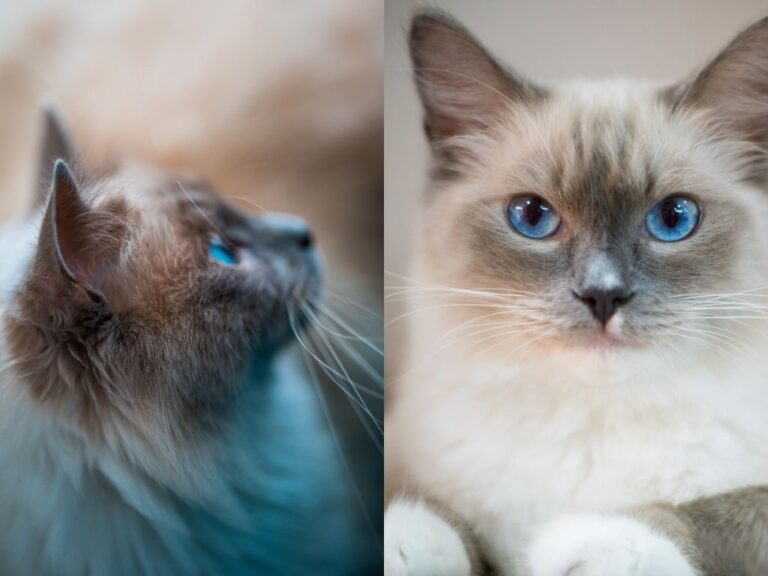 Cat lovers usually research different cat breeds to be better positioned to choose a perfect breed for different reasons. Each cat breed is very different, but their character and adoration remain constant. Though, you may find out that some cat breeds are friendly than others. Despite the fact that cats are very popular pets all over the world, haters think that cats are selfish, unfriendly, and demonic. This has affected most new cat owners, and they generally want to understand different breeds before they settle for a certain dam.

The wrong-headed assumption that cats are demonic and unfriendly lies in the fact that cats don’t enjoy the company of humans. This is somewhat untrue because there are some breeds that are loners and others are affectionate lovers of Human Being Company. So what is the best cat breed I should go for? What’s the difference between Birman and Ragdoll? Let’s find out in this brief.

Let’s start with the most basic difference between the Birman and Ragdoll cats. The sacred cats of Burma or better known as the Birman, have a unique story. The cats are believed to have got the blue eyes from the worshiped gods. The worshipped gods are equally believed to have sapphire blue eyes. Birman cats have white paws that are considered to be a symbol of purity the devotion.

The Birman are descendants of a pair of cats that were brought back from a Temple in Burma to France. This cat Breed has an old and a long history mainly because it came into existence in the 1920s. Besides the long history, the breed was recognized in 1949 by Fefe’.

On the other hand, the Ragdoll cats are believed to have been created by Ann Baker in the 1960s from a cat that was called Josephine. Josephine was a rare cat from Persia. The breeders of this cat said that Josephine had a rather loving personality, which is the reason why the cat was picked. In 1980s, some of this breed were imported to Europe and other parts of the world.

Differences in their physical features

These two cat breeds have a unique physical appearance that sets the two of them aside, regardless of the fact that the two breeds share most physical features such as long fur, rounded tip, face shape, and medium-sized ears. They also have a rounded triangle face and a medium-length muzzle, among many other features. Here are some common physical differences between the two breeds.

These two breeds may appear to be of the same size, but there are definitely some unique differences. Ragdoll cats take time to mature, and they often have a large size once they mature. The adult Ragdoll cat can weigh up to 9kgs or 20 pounds. Ragdoll females weigh up to 6Kgs or roughly 15 pounds. Moving on, Birman is medium in size and weighs a maximum of 6Kgs, or 12 pounds, and female Birman cats are relatively smaller cats.

These two cat breeds are color points, and only their extremities have colors. Closely observing these two breeds, it’s equally easy to notice that their eyes are Blue. The other parts of the body, including the tail, feet, and face, are darker than other parts of the body. However, comparing Birman to Ragdoll, you will notice that they have similar colors but the pattern is different. Both Birman and Ragdoll have a black seal, Blue chocolate. They equally have tabby markings, but the smoke and silver are allowed in the Birman breed. However, there are some exceptions for the cat registries. In this category, it’s tough to tell the difference but the main difference is their white pattern.

There are some important differences in the breeds shedding. The main difference, in this case, is that Birman is obviously not a true Hypo-allergic cat breed. What this means is that the Birman cat doesn’t have an insulating undercoat. The other cat may shed their coat more easily.

Your grooming chores may seem unique with each of the breeds mainly because of their uniqueness in shedding. Blooming your Birman cat is very easy compared to the Ragdoll cat. This is obviously because it sheds little fur. The lack of an undercoat also means that the cat hair is very unlikely to create mats and tangles when you’re brushing and grooming. The Ragdoll cats can shed relatively more fur, making the process of grooming and brushing more tiring and daunting.

While these two cat breeds were born lovely and adorable, the Birman cat has a comparatively long history of being a companion to human beings. According to the official cat breed registries, the Birman cats were recognized in 1925. The breed has had a better personality. Moving on, the Ragdoll cats were recognized in 1966. It is also loving and tolerant of children, and it makes to be a good companion.

You may confuse Ragdoll cats and Birman cats, but it’s not your fault. These two cats have rather similar qualities and physical appearance. At the same time, some unique differences can help you discern between them. The Ragdolls are hairier and larger in size. Check out keenly to spot certain differences in these two breeds.