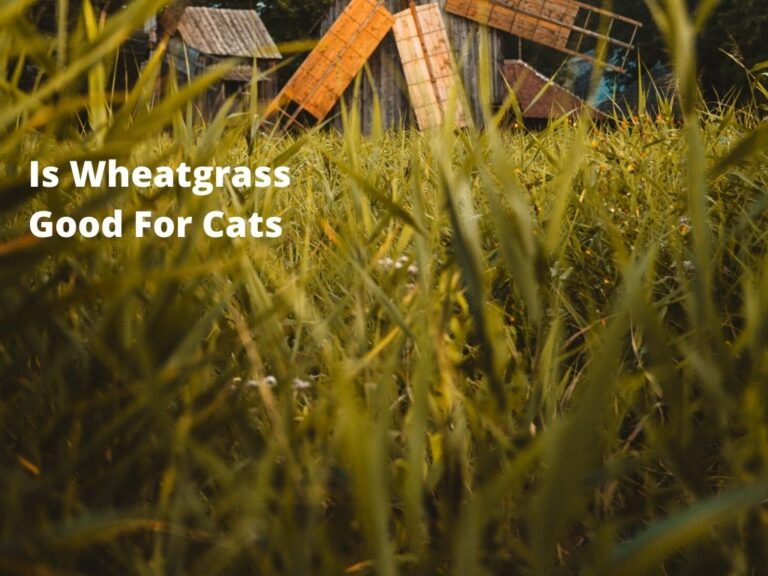 Is Wheatgrass Good For Cats – Should They Eat It

For some cat owners, it is a weird sight to see their cats munching on grass. The truth is it’s a surprising occurrence for many people basically because we know cats are meat eaters. They are carnivorous creatures meant to thrive on meat and not greenery.

Being a pet parent, you would want to ensure everything your kitty consumes is safe and will not be the cause of health repercussions. So, what exactly is the deal with cats and wheatgrass? Is it even safe for cats to be eating wheatgrass? Is wheatgrass good for cats? If one or more of these questions have crossed your mind, we are here to set the record straight. On that note, let’s tackle this often confusing issue of cats and wheatgrass.

As you might have guessed, it’s a plant that’s related to wheat. In the natural state, wheatgrass is actually a thick bladed grass. But that’s not the wheatgrass that you will encounter in many homes. The wheatgrass in most homes is the one bought in the stores. It’s the kind of wheatgrass that’s harvested when the plant is quite young.

In that case, the wheatgrass you will see some cats chowing down on is the young shoot of a wheat plant. When you soak and rinse the wheat seeds, they will begin to germinate and after a few days some green shoots will appear. The germination causes the shoots to fill up with various nutrients and vitamins. This might be the reason why cats are attracted to the wheatgrass at this time.

For carnivorous animals, it is indeed surprising to see some cats eat wheatgrass. Where does this irresistible urge come from? Well, no one knows for sure why cats would indulge in wheatgrass but some say pets are instinctively attracted to chlorophyll filled plants. The young shoots of the wheat grass plants are often packed to the brim with chlorophyll. A certain theory suggests prior to domestication, the wild cats would hunt small, grass eating animals like rodents and consume them whole. That way, they received green nutrients present in the prey’s body.

This might explain vaguely why your kitty might be attracted to wheatgrass. That said, even though some cats seem to enjoy eating wheatgrass, they lack the enzymes required to digest plants. Needless to say, as it is with any food item that’s not a natural part of your pet’s diet, there might be some downsides. When thinking of adding wheatgrass to your cat’s diet, practice informed precaution.

Regardless of their carnivorous lifestyle, cats enjoy eating wheatgrass once in a while. If your kitty spends some time out in the yard, sooner or later you will spot her munching on wheatgrass. While there are no scientific studies proving wheatgrass is harmful for cats, it’s not a good idea for them to feed in large amounts.

Is wheatgrass good for cats?

Modern researchers are yet to discover why cats eat wheatgrass or other kinds of grasses. But there are several theories offering a bit of an explanation. For instance, there is one particular theory that suggests cats may have evolved to eat grasses so as to clear their digestive tracts. This is attributed to what occurs in the wild felines like the lions, since they eat vegetation to get rid of gut parasites.

Another theory is based on cats with kidney disease and diabetes. You may have noticed some cat breeds suffering from kidney disease and digestive system disorders seem to have a huge appetite for wheatgrass. Well, it is believed that the cats use the grass ingestion to flush toxins, poisons, bacteria and fungi out of the body.

Vets and scientists are yet to fully understand what exactly draws cats to grasses. That being said, the general consensus is that your cat eating wheatgrass should not be a cause of worry. This is unless you notice unusual behavior or uneasiness in your cat. We don’t know for sure if wheatgrass is good for cats but it might be an indication of an underlying health condition. This is especially if your cat seems to be eating a lot of it lately.

Are there any benefits of wheatgrass for cats?

There are a couple of reasons why feeding wheatgrass to your cat has some health benefits. For one thing, wheatgrass is naturally packed with several nutrients among them protein, fiber and vitamins. Wheatgrass is also rich in chlorophyll which plays a role in the production of hemoglobin. With that being said, here is an overview of how your kitty can benefit from eating wheatgrass;

Wheatgrass is a perfect source of natural fibers. Even though cats can’t digest fiber, these are still useful in promoting digestive health. It makes cats vomit and in the process gets rid of foreign bodies in the digestive tract, like hairballs. This might be the reason why kitties instinctively eat wheatgrass.

Wheatgrass contains the B-complex vitamins and can therefore moderately boost your cat’s vitamin intake. However, cats can only absorb very small quantities of the plant-based vitamins. This means that wheatgrass is not nutritionally efficient for your cat.

Does wheatgrass have side effects on cats?

Cats might like munching on wheatgrass from time to time, but like most things it has some negative side effects. The most common side effect of cats eating wheatgrass is indigestion. For most cats, wheatgrass results in gastric disorders. Meaning, the cat will most likely puke the contents or suffer diarrhea. Needless to say, both situations are unpleasant for the cat.

Another issue associated with letting your cat eat wheatgrass is poisoning. Much of the outdoor wheatgrass is treated with harmful chemicals which are poisonous for pets. The best thing to do is monitor your fur baby each time she is out munching on wheatgrass.

Wheatgrass is safe for cats to eat as long as there are no chemicals on it and it’s fresh. However, under no circumstances should it be part of your cat’s diet. That’s because it will not add any nutritional value to your fur baby’s diet.