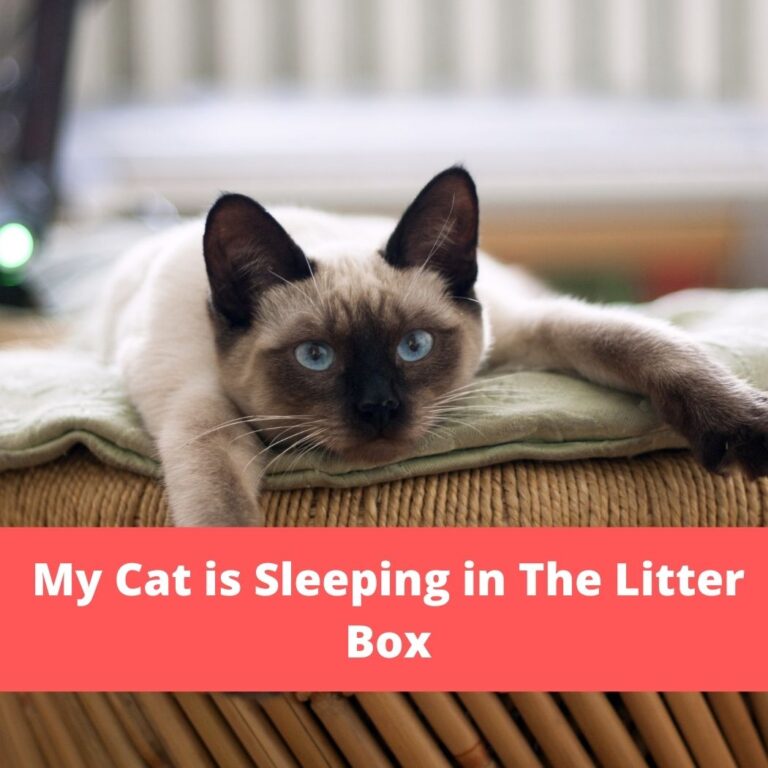 My Cat is Sleeping in The Litter Box – The Ultimate Guide

Cat owners are tasked with providing a nutritious diet and providing cats with a clean and safe environment both for living and sleeping. We have seen cats sleep in strange places from boxes to sinks and in shoe storage.

However, we have other cats that convert their litter boxes which act as their bathrooms to sleeping places. While litter boxes are not the most pleasant item to maintain, they are very crucial to the quality of life your feline receives. The cleanliness a cat demonstrates is also determined by the way the cat is using the litter box. This raises the question of why cats who are said to groom almost 50% of their time would sleep in the litter box. This behavior causes distress to the cat owner who is not only confused as to the reasons for this behavior but might also not have any solution for it.

Why would a cat sleep in the Litter box?

Many reasons could prompt this behavior in our furry friends. While some are behavioral causes that are easily solved, others are medical causes that would require immediate medical attention. Some of the reasons include;

Sleeping in a litter box is a common trait for a cat in an overly stressful situation. Having strangers in the house or a new baby are some of the situations that could make a cat encounter stress. These situations make them feel threatened which will prompt them to look for a place where they will feel safe. Just like humans tend to escape to the bathroom when avoiding any interaction with people, cats do the same by escaping to their litter box. Sleeping in a litter box might seem gross from the owner’s perspective but it is a haven for the felines who are known to mark their territory through urine. This place smells like them and is comforting for an anxious cat. The smaller and more enclosed the litter box is, the safer the cat feels.

Cats in the shelters are kept in cages which makes it easier to manage them due to their large numbers. When a newly adopted cat gets home from the shelter, they may seem confused about the living conditions. First, they are not used to the freedom of roaming around and they are also afraid that if they do, they will be eventually returned to the cages as it was in the shelter. Since there are no cages at home, a cat may decide to sleep in the only place that resembles one where they do not require to share a space with anyone else and that is a litter box.

When a cat’s pregnancy is almost due, they start looking for a place that will act as their nest. This place has to be secluded and away from the household traffic and noise where they can bring new life to earth peacefully. When they cannot find a better place, their litter box will fit the bill. The environment of the litter box is familiar to the mother cat and she does not feel threatened while in there. The litter box is however not an ideal place for birthing kittens as it could lead to illness of the young ones.

During any transition period, cats suffer from anxiety. For example, when there is an addition of a new pet, your cat does not know how to treat them and this brings about anxiety. Also, when your house is being remodelled and there are so much commotion and noise your furry friend may have anxiety. To soothe themselves, cats may retreat to a comfortable spot such as a litter box where they may end up sleeping. While the thought may not be amusing for humans to comprehend, it hearkens to their natural wild ways.

When you have changed the Litter

Cats may be fascinated or confused by a new type of litter. If you have always used one specific type of litter e.g. Sand and then you change it to something else like sawdust, cats are most likely to snuggle up or sleep on the brand new type of litter since they do not associate it with their litter box content.

The common problems associated with cats’ Urinary tract include Urinary tract infection, bladder stones, and urinary crystal formation. These problems cause inflammation on the lining of the bladder which makes them feel like relieving themselves even when the bladder has little urine. A severe condition causes the feline to feel like using the litter box frequently which could see them sleep there entirely.

In extreme cases, the urinary crystal may become lodged in your feline’s urethra hence causing an obstruction. This makes them sleep in the litter box as they will be trying to urinate but nothing will come out. Full urinary obstruction can be fatal within 48 hours.

What can you do to prevent cats from sleeping in the litter box?

A secure place for refuge

Since we have established that cats tend to retreat to a familiar place when they are stressed out, it is important that as the owner you find them a good spot for that. E.g. creating a retreat place in the garage where the cat can escape when there are strangers or noise in the house ensures that they do not sleep in the litter box.

In a house with multiple cats, it is good to ensure that you have multiple litter boxes to avoid the dominance and territorial marking which makes the cats sleep in the litter box. According to veterinarians, there should be at least one more box than cats. This means that if you have 3 cats, you should have four litter boxes.

Anxiety is one of the reasons that cats sleep in the litter box. The cat owner needs to distinguish when their cats are experiencing anxiety and help them to cope. Playing with them, cuddling them, or brushing them offers the cats reassurance making them feel less anxious. In case the anxiety persists and occurs frequently, speak to your veterinarian about the option of putting the cat on some- anxiety medication that will help your kitty help alleviate his stress.

Eliminating excessive noise in the house

Cats are sensitive to loud noises such as door slams, loud laughs, loud music, and being around noisy people. These noises cause a release of chemicals in the cat’s brain which leads to stressful behaviors that they try to solve by hiding in the litter box. To ensure your cat does not retreat to this option, try eliminating the noise. Without the stressful conditions, the cat will not retreat to the litter box.

Prepare a nest for your pregnant cat

When you notice that your cat is pregnant, prepare a nesting place for them that contains clean soft blankets and towels. This should be placed near the litter box so that they have access without having to go far hence leaving the kittens for a long time. It should be prepared a few days or weeks before birth to give the mum an appropriate amount of time to familiarize herself with the new surroundings. Also, ensure you have food and clean water nearby for the mum once she gives birth.

To avoid having cats sleeping on a new type of litter upon introduction, you should do a gradual change. Mix half of the old type of litter with half of the new litter and let it last for a few days. Keep increasing the ratio of the new litter until the old litter fades away during the next changes. This way the kitty will not have an opportunity of being fascinated by a different litter material that could make them sleep in it.

If your feline is sleeping in the litter box due to medical conditions, you should visit a vet immediately. At the clinic, the vet will conduct a blood test, X-ray, or ultrasound to check for bladder stones. In other cases, a urine test may be conducted to test for any crystals or bacteria that may be causing Urinary tract infection (UTI)

When a kitten sleeps in the litter box, and medical conditions are ruled out, you should concentrate on training them on the appropriate place to sleep. This enables them to form good habits while they are young as it may prove to be difficult to teach them when they grow older. To create a distinction between the litter box and fun you may consider buying them some toys which will occupy them.

Why is my old cat sleeping in the litter box?

As cats grow older they start experiencing some chronic diseases which deteriorate their strengths. A disease such as arthritis attacks the limbs and joints making it hard for the senior cat to jump as they used to when they are young. This might make it difficult for them to reach their beds especially if they are located at a higher place forcing them to retreat to their litter boxes for sleep. To make it easy for them and avoid sleeping in the litter box, consider lowering the position of the bed once the cat is older.

Why are the kittens sleeping in the litter box yet they have a bed?

Should I let my cat continue sleeping in the litter box?

Even after ruling out any medical causes, you should find ways to make the cat stop sleeping there. It may be what they want at the time but it is not healthy neither is hygienic for both the cat and the owner.

Cats are very curious creatures who constantly get in trouble for their curiosity. Other times, it is their behaviors such as sleeping in the litter box that spikes the worry in their owners. To ensure good health and long life for your feline, you must be vigilant on all their behaviors. Always check on their habits to know when they change and when your attention is required.