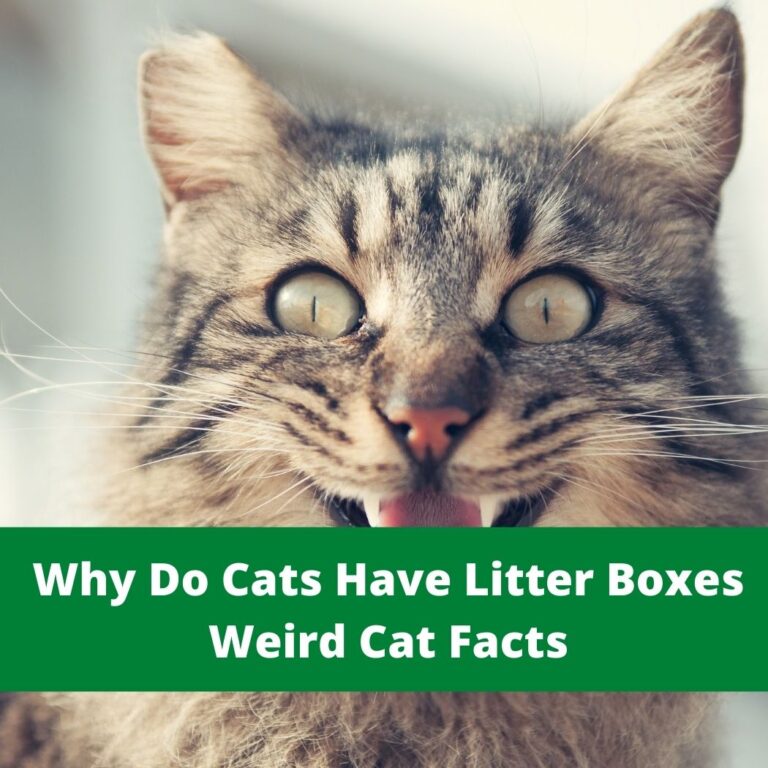 Why Do Cats Have Litter Boxes – Weird Cat Facts

If you are an avid cat lover, you’ll most likely be very familiar with cat litter boxes. In fact, there is a pretty good chance that this item is often top on your checklist when it comes to your feline friend.

In today’s post, we will take a moment to explore our feline friends’ lives and why they have litter boxes.

But before then, let’s tell you what cat litter boxes are and why they are super important to raising a healthy and happy cat.

What is a cat litter box?

A litter box, sometimes called a cat box, sandbox, cat tray, litter tray, or litter pan, is a urine and feces collection box for cats. This is mostly provided for cats that are permitted to roam freely indoors but aren’t allowed to go outside to get rid of their metabolic waste.

Pet owners who favor cat litter boxes prefer not to allow their cats to roam outdoors because they fear that they may succumb to the myriads of dangers lurking outdoors.

More so, when used indoors, cat litter boxes make it easy to collect urine and feces. And with a suitable litter to go with your preferred litter box, you wouldn’t have to deal with the offensive odor locked in cat urine and feces.

For pet owners looking for a decent litter box that wouldn’t cost a fortune, you can check out top brands like Catit Hooded Cat Pan, Nature’s Miracle High-Sided Cat Litter Box, Petmate Booda Dome Cleanstep. These litter boxes will get the job done, plus they are simple to use.

Cats have litter boxes because of their natural instincts

If you take a close look into our four-legged friends’ behavior and instinct, you’ll discover that cats have an intuitive desire to bury their waste when done. This is their unique way of masking their presence and scent from other animals in the areas.

Surprisingly, this behavior comes naturally as even kittens are seen to display the same instinct, even though they haven’t observed their mother doing the same. According to experts, this behavior is an instinct that rarely requires teaching.

Cats have litter boxes to cover their tracks

In order not to be attacked or eaten by predators, ancestral cats usually covered their tracks. The ones with better fitness, who were more likely to survive and reproduce, knew for a fact that hiding their waste will mask their scent and increase their chances of survival.

The more intelligent cats preferred soft dirt or sand since their granular consistency made it super easy for them to bury their waste. This explains why cats are naturally attracted to cat litter boxes and know exactly what to do once they feel the litter beneath their paws.

Research has also shown that among a group of feral cats, the dominant cat always leaves its waste covered just to mark its territory. And as an act of submission, other subordinate cats cover their waste. This kind of explains the reason why dominant cats in a multiple-cat household leave their waste unburied in the litter box.

Do you need to train your cat to use the litter box?

Our four-legged friends have a natural instinct to cover their waste in sand or soil, and kittens also follow suit by observing their mother. Typically, kittens can use the litter box at 3 to 4 weeks of age. So when you bring your kitten home, it is very likely that she can already use her litter box.

And the cool part is that you wouldn’t have to train your cat to use the litter box in the same way you would when training a puppy. That said, it’s super important to ensure that your feline friend knows the litter box’s exact location in her new environment. Also, ensure that the litter box isn’t noisy or placed in hard-to-reach places.

When introducing your kitten to her litter box for the first, start by guiding her to the litter box and once she is in, proceed to gently take her front paws and show her how to dig the litter once or twice. It’s okay if she jumps right out as it is her first time.

Try to place her in the litter box during times of the day when most cats would typically visit the bathroom: after meals, first thing in the morning, after playing for some time, or waking up from a nap.

Also, keep in mind that our four-legged friends love privacy, so try not to disturb your cat when using the litter box.

Can you have a cat without a litter box?

How often should a cat use the litter box?

Most cats will use their litter box at least 3-5 times daily. At this rate, you’ll have to clean your cat’s litter box every couple of days to keep things clean and pleasant.

Do cats need access to the litter box at night?

Thanks to their natural instinct, cats have a knack to cover their waste when they are done. This helps them to cover their tracks and mask their scent, so predators don’t easily spot them. This natural behavior has allowed them to use their litter boxes without a hassle.